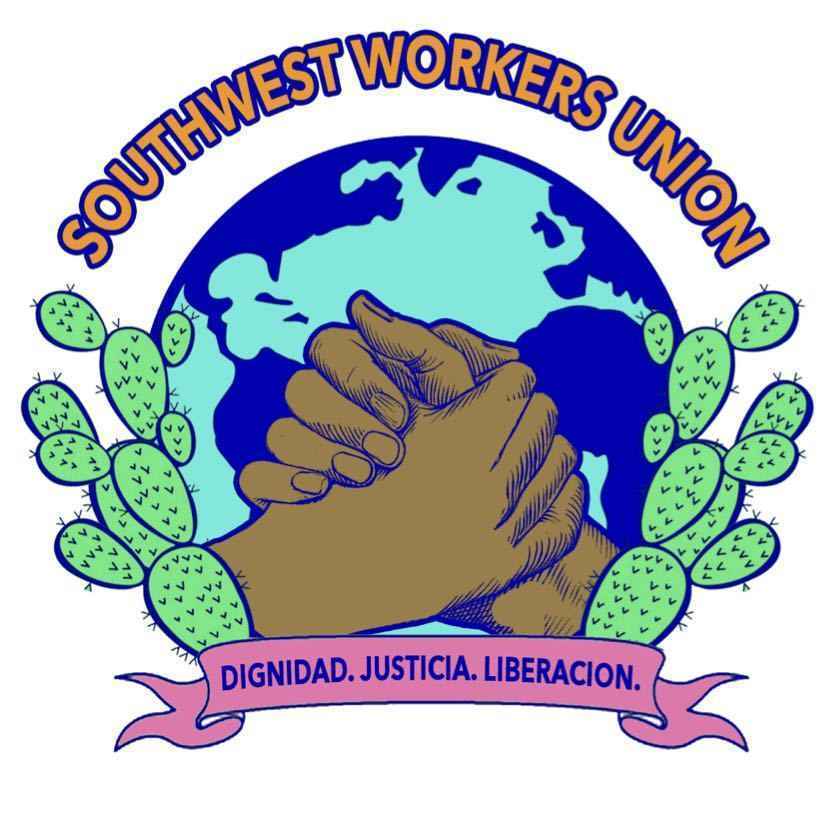 We are Fundraising to Build a Just Community

Originally founded to advocate for just wages and working conditions amongst San Antonio’s public school workers, SWU’s scope of work and political impact has grown significantly over the past 33 years to address these multiple facets of injustice that impact low-income families in South Texas. SWU’s areas of strategic organizing include Economic Justice, with a focus on organizing low income workers; Healthy Communities such as toxic clean up, climate action and food justice; and finally we focus on Leadership Development and Healing Culture. Over the years, the organization has won major victories, for example, the contamination cleanup at the former Kelly Air Force Base and passed regulations on climate and air quality, the most recent being the SA Climate Action Plan with a strong focus on Climate Equity. SWU has built a strong popular political education and leadership development program that has involved thousands of members and allies from across the country. Additionally, SWU has advanced a political empowerment program that has educated new voters, increased voter turnout, and won key redistricting battles in majority-minority voting districts.The economic justice program at SWU has won living wage resolutions in low-income school districts and worked to reframe the debate on fair living wages, and has launched a women's based worker program named Comadre Economies. SWU’s movement-building efforts have led to concrete partnerships and alliances that connect movements for justice in poor and working class communities of color to a larger collective struggle for systemic change.

SWU organizes its members within the complex political context of South Texas, where residents face the reality of scarce resources, low-paying jobs, and limited economic advancement opportunities. The surprising change of national administration coupled with the state budget crisis have led to additional cuts to social services and public education, women’s reproduction rights, increased unemployment, and policies that further marginalize working- class and migrant families. State and national budget cuts have weakened the public safety net for low-income communities of color across the state and caused countless hate crimes and unjust policies against immigrant families. SWU believes in reframing public policy through the lens of workers while increasing community led structures of education and economy thus changing the structural system. Direct action is key to uplifting our voices and address fear within our membership.

What does SWU do?

Our six person staff runs a community center housing a garden cooperative with our Roots of Change Community Garden, arts and healing programing through The Movement Gallery, host a seasonal local women, queer pop up shop, reconnect youth to nature and social justice with year long after school programing, we work alongside agencies to ensure policy is fair and accessible to those most affected by it, we have monthly member meetings, host a multiple of organizations in our space, support the domestic workers sewing coop and healing circle, run skills shares and workshops to increase leadership development, we phone bank and block walk to engage over 50,000 people in important elections and policy changes, . . . and we must continue to do this with heart, soul, and with the guidance of our members to ensure we are moving the needs of now, but also changing the rules to prevent future injustices.

And finally we try to uplift our values in every part of our work: The Earth, Familia, Respect, Leadership, Knowledge, Culture, & Gratitude.


From the bottom of our Corazon, Thank You for the donation.